On the Metamorphosis from Private Citizen to ‘Public Enemy’ 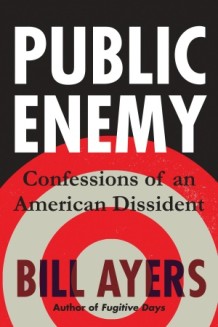 Buy the Book At:

Editor’s Note: Bill Ayers is a different man depending whom you ask. To the left, he’s an anti-war hero and an education reformer. To the 2008 McCain-Palin ticket, he remains America’s “domestic terrorist,” whose connection to then-Senator Barack Obama proved useful fodder for a smear campaign. Here, and in his most recent memoir Public Enemy, Ayers reflects on the bizarre, out-of-body experience of having to reconcile his personal life with the warped public image latched onto by the media.

It was a mid-April evening, the last light reluctantly giving way outside the front window as seminar ended and a dozen of my graduate students pitched in to clean-up and a self-described “political junkie” clicked on the TV and flipped to the presidential primary debate, well underway by now, between Hillary Clinton and the young upstart from Chicago, Barack Obama. All the promise of new life was in the air.

At that moment the moderator, echoing a dramatic narrative spun by everyone running against Senator Obama, turned to him and said, “On this…general theme of patriotism in your relationships…” The story always involved Obama’s former pastor, the Reverend Jeremiah Wright, whose impassioned statements about racism and the American government (“God damn America!”) had been widely disseminated and discussed, but soon the moderator switched direction:  “A gentleman named William Ayers…He was part of the Weather Underground in the 1970s. They bombed the Pentagon… He’s never apologized for that…Your campaign has said you are ‘friendly.’ Can you explain that relationship for the voters…?”

I thought Obama looked slightly stricken, temporarily off-balance and uncharacteristically tongue-tied — I was probably projecting because I felt suddenly dizzy, off-balance and tongue-tied myself — and my students were thunderstruck. Their heads snapped in my direction as Obama replied: “This is a guy who lives in my neighborhood, who’s a professor of English in Chicago who I know… [T]he notion that somehow as a consequence of me knowing somebody who engaged in detestable acts forty years ago, when I was eight years old, somehow reflects on me and my values doesn’t make much sense, George.”

An explosion of laughter ricocheted around the room, everyone clamoring to make sense of the bombshell that had just dropped into our little seminar and by extension reverberating around the country and the world. One student turned to me and said, “Oh my God, that guy has the same name as yours,” and another explained to her excitedly that that’s because we were indeed the same guy — “Bill’s the guy, and we’re in the neighborhood George is talking about!”

I think for some of my students there was an abrupt awareness that while they’d known me quite well a few minutes before, they had suddenly ceased to know me at all, and that made sense to me too because for a moment I wondered who I was as well. Most were super-considerate, asking what I needed and attending to me as if I’d been hit by a truck, which was a bit how I felt myself. When they finally trickled out, some still shaking their heads in marvelous disbelief, others smiling in wonder, each offered a hug or a hand-shake.

The evening was entirely surreal, and I was struggling to regain my balance and come to terms with the sudden sense that this cartoon character — Bill Ayers — looked exactly like me and was about to become a punching bag in a presidential campaign, a character who might actually have an impact on the outcome of a national election. It felt altogether too big and all-in-all too strange.

I thought about pitiable Gregor Samsa who awoke one morning after disturbing dreams to find himself transformed in his bed into an enormous cockroach. The metamorphosis was of course incomplete because Gregor was still Gregor inside — same mind, same memories, same consciousness — and he remained painfully aware of the revulsion he induced in others. And I thought about the professor in Don DeLillo’s White Noise who experienced the shock of a major toxic event engulfing his small town, the panic spreading as a poisonous chemical cloud drifted overhead and the people were forced to evacuate, and the weird dislocation when he was proclaimed officially, statistically dead in spite of being very much alive. What could he say to explain himself? How could he adequately grasp his situation, split at the core of his being and stumbling through a familiar landscape unexpectedly made strange? I knew that I didn’t want to be that professor; I knew I didn’t want to become a Kafkaesque character flailing for a hundred years to set the record straight.

This entry was posted on Saturday, December 28th, 2013 at 12:43 pm and is filed under Uncategorized. You can follow any responses to this entry through the RSS 2.0 feed. Both comments and pings are currently closed.