Comments Off on Loud and Clear |

Greg Michie on the Air

Comments Off on Greg Michie on the Air | 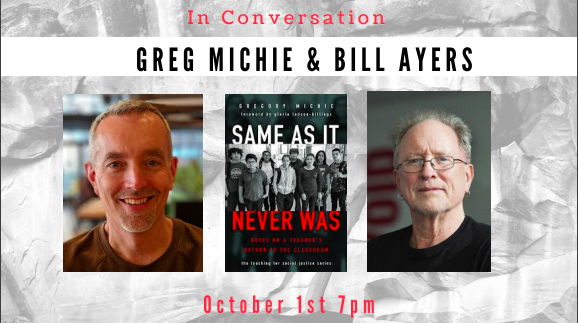 Join us October 1st as we welcome Greg Michie, author of the new book SAME AS IT NEVER WAS (8/16/19 Teachers College Press), in conversation with Bill Ayers

About SAME AS IT NEVER WAS:

After a decade as an education professor, Greg Michie decided to return to his teaching roots. He went back to the same Chicago neighborhood, the same public school, the same grade level and subject he taught in the 1990s. But much had changed—both in schools and in the world outside them. Set in the recent past, this book chronicles Michie’s efforts to navigate the new realities of public schooling while also trying to rediscover himself as a teacher. Against a backdrop of teacher strikes and anti-testing protests, the movement for Black lives and the deepening of anti-immigrant sentiment, this book invites readers into an award-winning teacher’s classroom as he struggles to teach toward equity and justice in a time where both are elusive for too many children in our nation’s schools.

Gregory Michie teaches 7th- and 8th-graders in Chicago’s Back of the Yards neighborhood. He is the author of Holler If You Hear Me: The Education of a Teacher and His Students, Second Edition; See You When We Get There: Teaching for Change in Urban Schools; and We Don’t Need Another Hero: Struggle, Hope, and Possibility in the Age of High-Stakes Schooling

William Ayers, Distinguished Professor of Education and Senior University Scholar at the University of Illinois at Chicago (retired), founder of both the Small Schools Workshop and the Center for Youth and Society, taught courses in interpretive and qualitative research, oral history, creative non-fiction, urban school change, and teaching and the modern predicament. A graduate of the University of Michigan, the Bank Street College of Education, Bennington College, and Teachers College, Columbia University, Ayers has written extensively about social justice, democracy and education, the cultural contexts of schooling, and teaching as an essentially intellectual, ethical, and political enterprise. He is a past member of the Executive Committee of the Faculty Senate, and past Vice-President of the curriculum division of the American Educational Research Association.

Comments Off on Next TUESDAY at Volumes w GREG MICHIE |

Comments Off on loud and clear |

Climate activist Greta Thunberg, 16, addressed the U.N.’s Climate Action Summit in New York City on Monday. Here’s the full transcript of Thunberg’s speech, beginning with her response to a question about the message she has for world leaders.

“My message is that we’ll be watching you.

“This is all wrong. I shouldn’t be up here. I should be back in school on the other side of the ocean. Yet you all come to us young people for hope. How dare you!

“You have stolen my dreams and my childhood with your empty words. And yet I’m one of the lucky ones. People are suffering. People are dying. Entire ecosystems are collapsing. We are in the beginning of a mass extinction, and all you can talk about is money and fairy tales of eternal economic growth. How dare you! 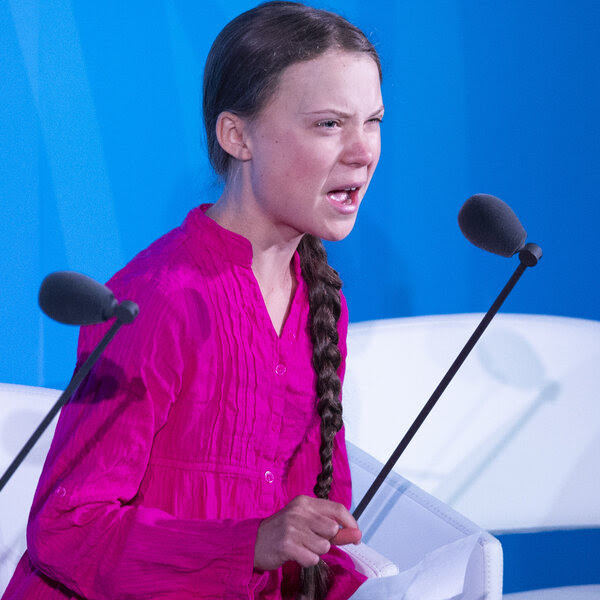 “For more than 30 years, the science has been crystal clear. How dare you continue to look away and come here saying that you’re doing enough, when the politics and solutions needed are still nowhere in sight.

“You say you hear us and that you understand the urgency. But no matter how sad and angry I am, I do not want to believe that. Because if you really understood the situation and still kept on failing to act, then you would be evil. And that I refuse to believe.

“The popular idea of cutting our emissions in half in 10 years only gives us a 50% chance of staying below 1.5 degrees [Celsius], and the risk of setting off irreversible chain reactions beyond human control.

“Fifty percent may be acceptable to you. But those numbers do not include tipping points, most feedback loops, additional warming hidden by toxic air pollution or the aspects of equity and climate justice. They also rely on my generation sucking hundreds of billions of tons of your CO2 out of the air with technologies that barely exist.

“So a 50% risk is simply not acceptable to us — we who have to live with the consequences.

“To have a 67% chance of staying below a 1.5 degrees global temperature rise – the best odds given by the [Intergovernmental Panel on Climate Change] – the world had 420 gigatons of CO2 left to emit back on Jan. 1st, 2018. Today that figure is already down to less than 350 gigatons.

“How dare you pretend that this can be solved with just ‘business as usual’ and some technical solutions? With today’s emissions levels, that remaining CO2 budget will be entirely gone within less than 8 1/2 years.

“There will not be any solutions or plans presented in line with these figures here today, because these numbers are too uncomfortable. And you are still not mature enough to tell it like it is.

“You are failing us. But the young people are starting to understand your betrayal. The eyes of all future generations are upon you. And if you choose to fail us, I say: We will never forgive you.

“We will not let you get away with this. Right here, right now is where we draw the line. The world is waking up. And change is coming, whether you like it or not.

Comments Off on GRETA THUNBERG |

Comments Off on TUESDAY at 57th St Books |

He’s endorsed by Angela Davis, Tiffany Caban, Shaun King, Rebecca Solnit and a zillion other progressives.
He needs to raise several thousand dollars by Saturday at midnight, the end of the reporting period.
Please donate now—NOW—and if you are at the maximum, ask a friend to join in. https://www.chesaboudin.com/
Joy and Justice, Bill

Comments Off on CHESA needs us NOW!! |

I’M AFRAID YOU HAVE HUMANS

The irony of this old New Yorker cartoon by Eric Lewis is so precise I haven’t been able to get it out of my head for two years. The speaker is the planet Saturn, clad in doctor’s garb — a stethoscope circling his forehead — giving the bad news to a sick and miserable-looking Earth:

“I’m afraid you have humans.”

What more can you say? But of course the dystopian irony is intensified by the fact that the artist is human, the reader (me) is human, and the drawing itself portrays Planet Earth with a human face, all of which summons forth a half-century-old quote an oceanographer, a member of President Lyndon Johnson’s science advisory committee, told Bill Moyers when he was a special assistant to LBJ. Moyers recounted his words at a climate conference earlier this year:

“Now, he said, humans have begun a ‘vast geophysical experiment.’ We were about to burn, within a few generations, the fossil fuels that had slowly accumulated in the earth over the past 500 million years. Burning so much oil, gas and coal would release massive amounts of carbon dioxide into the atmosphere, where it would trap heat that otherwise would escape into space. Earth’s temperature could rise, causing polar ice to melt and sea levels to rise, flooding the earth’s coastal regions.”

Johnson, according to Moyers, took this all seriously until — yeah, the irony gets too hot to handle here — the Vietnam War fully consumed his attention. Now it’s 2019, not 1965, and the “vast geophysical experiment” has continued unabated. So have America’s wars, militarism and global weapons sales. And nationalistic paranoia is spreading across the whole planet.

I’m afraid you have humans, oh Planet Earth. Even the national paranoiacs, with Donald Trump seemingly in the lead, know it. That is to say, they know the planet is in trouble and global chaos is inevitable, but they see only one way to respond: tighten the borders, build walls, protect themselves from refugee invasion, prepare for war.

But something else is also emerging: an alternative to this insanity. Perhaps you could call it awareness.

What is emerging, as exemplified by the looming climate strike that is set to start on Sept. 20, led by young people in some 150 countries — the generation coming of age on this injured planet — who will stage numerous rallies and demonstrations demanding real change (at long last, for God’s sake), is something that can only be called transnational. Climate change is global in nature and the only way to address it is beyond the national borders that cage our thinking and protect the financial beneficiaries of this “vast geophysical experiment” that remains ongoing.

One of these young people is, of course, the internationally known 16-year-old Greta Thunberg, of Sweden, who will be leading a demonstration in New York City on Friday, where the million-plus students in the city’s public school system have been excused if they want to join the strike.

Has sanity — and by sanity, I mean hope — finally emerged as a counterforce to the impenetrable status quo of fossil fuel consumption, capitalism and nationalism?

Here’s how Thunberg put it in a TED Talk she gave last year in Sweden: “The one thing we need more than hope is action. Once we start to act, hope is everywhere. So instead of looking for hope, look for action. Then, and only then, hope will come.”

Has the upcoming generation taken it upon itself to save the planet? Is a transnational human unity beginning to create itself?

Naomi Klein, in an interview with Common Dreams following the release of her new book, On Fire: The (Burning) Case for a Green New Deal, attempting to describe the enormity of the movement, said:

Indeed, as Klein pointed out, climate change is now on the Democratic political agenda. The party’s candidates for 2020 are addressing it and expressing support for the Green New Deal — “whether they meant it or not,” Klein noted. But even a candidate’s tepid endorsement of climate change action is shocking. Media and political bouncers have kept issues of real significance (e.g., war, demilitarization) out of presidential campaigns since George McGovern was clobbered by Richard Nixon in 1972.

Let hope emerge! I don’t know what it will look like, except that it has to be global. It has to be the size of World War II, which spawned the Manhattan Project and a nuclear-armed planet with the capacity to kill itself in the short term as well as the long term.

And by no means does hope mean ignoring the melting ice, rising oceans, devastating fires and intensifying storms — or the extinction of species — that our century-plus of geophysical experimentation has produced, or the seeming rise of fascist governments around the globe and the “climateapartheid” they are preparing for.

Like it or not, we have humans here on Planet Earth. It’s up to all of us to determine what that means.

Robert Koehler is an award-winning, Chicago-based journalist and nationally syndicated writer. His book, Courage Grows Strong at the Wound is available. Contact him at koehlercw@gmail.com or visit his website at commonwonders.com.

Comments Off on I’M AFRAID YOU HAVE HUMANS |

Comments Off on NEW YORK TOMORROW 9/21 |

Comments Off on Back to School |